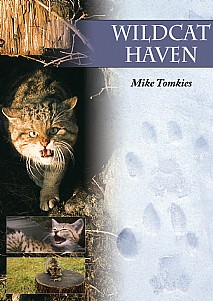 Some seven years after abandoning the life of an international journalist for a life in the wilds, Mike Tomkies began a remarkable experiment, rearing the most ferocious animal to roam wild in Britain - the Scottish wildcat.

The true wildcat is now an endangered species and only to be found in inaccessible parts of the Scottish mountains. It may look like a giant domestic tabby, but with its bright red tongue and vicious claws, it is a formidable and fearless opponent of mankind. It is justly noted for being untameable. To begin with, Mike became the custodian of two spitfire kittens, found abandoned in a ditch when only a few weeks old. Even before they were fully weaned in his kitchen, they could be approached only with extreme care, usually with thick gauntlets as protection against the ravages of tooth and claw. He named them Cleo and Patra, and built them a sturdy natural pen between his lonely cottage and the west wood. The kittens were only seven months old when a spitting and snarling ten-year-old tomcat arrived from London Zoo to change all their lives.

Mike resolved to breed a wildcat family and prepare them for a return to the wild. In the years that followed little of the scant scientific theory on wildcat behaviour was borne out by his careful observations. An update of the lengthy appendix which discusses wildcat populations, history and research on the breed including issues of genetic purity is included in this new edition.

Mike's extraordinary adventures in raising and releasing no fewer than three litters, two pure wildcat and one hybrid from a domestic male gone wild, are full of incident, at times hilarious, and deeply moving. The runt of Cleo's second litter demolished Mike's last defences by giving him her total trust and affection while fiercely retaining an utterly wild and independent nature, so he became first to 'tame' a wildcat.

This unique story of communion between man and animal is taken from two books that have long been out of print - My Wilderness Wildcats and Liane, A Cat from the Wild - revised and updated by the author and illustrated with many new photographs, all in colour.

This captivating story by one of the UK's most celebrated nature writers will not only delight Mike's legions of devoted fans but will also bring his work to the attention of a new generation - at a time when the plight of the Scottish wildcat is increasingly featured in the media. Of great appeal to all who love wildlife, the natural world, the wildcat in particular, and anyone looking for an engrossing read.

'Mike Tomkies name is synonymous with the wildcat and he probably knows more about them in the wild than any other naturalist. ...Nobody has studied wildcats as much as Mike. His research led to a list of statements on page five of this new book. He states what the books say and then gives the true version from his own experiences. ...The book reveals Mike's plans to breed a wildcat family and prepare them for a return to the wild, and it is a fascinating account. The photographs are excellent and really enhance the very readable text'. Ray Collier, Former Chief Warden, Highlands. Highland News, North Star, Lochaber News

'... His story is illuminating... ...the author's eventual taming of a wildcat kitten form a fascinating story which, still, very few people have been privileged to witness. ... ...Tomkies' books must be the first port of call for anyone interested in Scottish wildcats. ...will be deeply appreciated by anyone with any interest in our native wildlife and its conservation'. Habitat

'...a fascinating book that tells the sometimes hilarious and deeply moving story of Mike's adventures in raising and releasing no fewer than three litters of wildcats...' Vicky Halls, Cat Behaviour Counsellor

'...Tomkies shares his work and experiences with wildcats, including breeding and releasing three litters...it's a charming. insightful and inspiring read.' Your Cat Magazine...'

'...this book also serves as a timely reminder of the need to conserve our only native feline, before it is entirely assimilated through loss of habitat, persecution and - most importantly - through interbreeding with our unwanted pets.' Scottish Field

“Thank you for your help, particularly when Amazon let me down! ”
Joe, UK
“The book arrived on Saturday so earlier than you expected...Thank you very much for your help and I will definitely recommend you and your company. ”
Chris, UK
“... book came immediately, many thanks. ”
T.F, UK
Dunbeath, Caithness, Scotland KW6 6EG, UK T: +44(0)1593 731 333 E: info@whittlespublishing.com