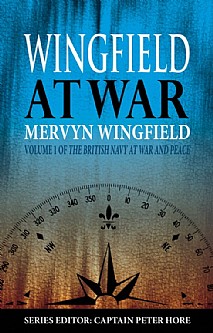 Vol. I of The British Navy at War and Peace Series editor Captain Peter Hore

'... It is remarkable that one man should have been involved in so much action in so few years. ... I commend his biography to the reader: ... by any standard he was a hero, and he tells his life’s story with modesty and humour.' Extract from the Foreword by Admiral Lord Boyce

Captain Mervyn Wingfield was one of the last of his generation of submariners who made their reputation in the Second World War. Pre-war he had served on the China station and lived the riotous life of a young officer; in the war he commanded three submarines, Umpire, Sturgeon and Taurus, survived a collision in the North Sea, spent a winter in the Arctic, penetrated the Norwegian fjords submerged through a minefield, surfaced off St Nazaire in view of German guns to act as a navigation marker for the raiding force, fought cavalry in the northern Aegean, and later, off Penang, was the first British submariner to sink a Japanese submarine – and barely survived the subsequent, vicious counterattack after Taurus was severely damaged and became stuck in the mud at the bottom. Any one of these incidents would have merited a place for Wingfield in the history of naval warfare and the pantheon of submarine heroes.

The Royal Navy’s most senior submariner, Admiral Lord Boyce, notes in his Foreword that the diesel-powered submarines in which both men served were not so different, but the risks which Wingfield took in wartime were greater and Lord Boyce admired the way in which Wingfield led his crew and was loved by them. Many men were burned-out by the war, but in the postwar years Wingfield enjoyed a successful peacetime career in the Royal Navy where, finally, his personal qualities and his diplomacy were put to the test as a naval attaché.

In retirement Wingfield was well-known for hosting lively beef and Stilton lunches at the London Boat Show! He was also one of the last of the generations of Anglo-Irish families who served the Crown and provided officers and men for the Army and the Navy, and his story additionally gives some insights into his early days, especially with regard to being a young officer in the Royal Navy in the 1930s.

Will be of immense appeal to everyone interested in modern naval and military history and biographies. The story of Wingfield’s incredible achievements in the face of almost overwhelming adversity will enthral the general reader.

'...there is more than enough colour to make all the memories very interesting. ... He writes in an engaging and direct way, self-deprecating but always with the confidence of one who is far more able and conscientious than he would claim. ...this is an easy book to read and enjoy. ...this is a delight - honest, informative, humorous, totally recognisable and, by this reviewer, highly recommended'. The Naval Review

'Even in an era when submarine captains were often a bit mad or eccentric, the amazing Mervyn Wingfield stood out a mile! ...Second World War submarine Captain Wingfield played a vital part in our victory.' The Weekly News

‘Mervyn Wingfield was a submariner who commanded three boats, UMPIRE, STURGEON and TAURUS during World War 2; he did not serve with the RAN but his stories of the RN from 1925 onwards describe an organisation that will be familiar to generations of Australians who were trained by or who served with the RN.  He spent time on the China Station during the 1930s in the submarine ODIN, sister ship of the OTWAY and OXLEY operated by the RAN between 1927 and 1931, and writes of a way of life that is now almost forgotten with quiet humour that brings his adventures to life in the reader's imagination.  … This is a delightful book that gives insight into historical events through the eyes of the author which are carefully edited to ensure their accuracy.  I thoroughly recommend it.’ Headmark


'...As one of the more successful and decorated wartime submarine commanders his book is well worth a read'. In Depth

'...Wingfield's entertaining - in places rather thrilling - and always fascinating autobiography. ...Wingfield's fantastic story... We are plunged into a lost age of fading empire and the life or death struggle against the Nazis and Japan's militaristic fanatics.  ...We discover amazing incidents and people in the light he shines on the fine grain of history. They inspire us and provide a few chuckles. Among the highlights is Wingfield's submarine (HMS Taurus) duelling with Bulgarian cavalry and his courageous intrusion (in command of HMS Sturgeon) through a minefield in a Norwegian fjord to sink an enemy cargo vessel'. Warships International Fleet Review

‘…via this book I much enjoyed ‘meeting him’.  Army Rumour Service