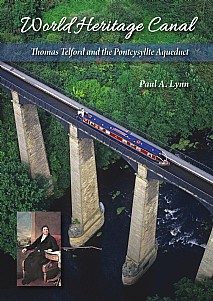 Thomas Telford and the Pontcysyllte Aqueduct

Thomas Telford was arguably the greatest civil engineer Britain has ever produced. This book reveals his humble beginnings and then  describes his self-propelled rise from journeyman stonemason to famous canal engineer.

In 1793 Telford was appointed principal engineer on the Ellesmere Canal (now the Llangollen Canal) in North Wales. An 11-mile section of the canal, including his magnificent Pontcysyllte Aqueduct, has recently been granted UNESCO World Heritage status, putting it in the company of such international icons as the Taj Mahal, the Statue of Liberty, and the Tower of London. Completed in 1805, the aqueduct represented a stupendous advance in civil engineering; but it was designed for canal boats and tucked away in a relatively unfrequented valley. Following a rapturous opening ceremony and initial commercial success, a decline of the canal system from about 1840 onwards made it look increasingly redundant. The richly-deserved UNESCO award has put the aqueduct and its canal back in the limelight.

This is a personal and professional story, putting Telford’s work into its historical and social context, showing him as a remarkable mix of good-natured ambition, talent and resilience.  Today there is great interest in Britain’s transport infrastructure. The 19th-century engineers who did so much to pioneer and improve it are rightly seen as heroes. It will be appreciated how much is owed to Telford and others for creations that have stood the test of time, built with courage and daring, in an age when major construction projects relied heavily on pickaxes, wheelbarrows, and an extraordinary amount of hard physical labour.

Richly illustrated in full colour, with many up-to date photographs of the places where Telford lived and worked, it will appeal to civil engineers, canal lovers, boaters, walkers, tourists, and all those interested in the history of Britain’s industrial heritage.

‘…this excellent book…an ideal companion…much more than a guide, it is also a history book and part biography...it is a tribute to the work of a great engineer’. Spout, Magazine of the Ashby Canal Association

'This is a real gem of a book... The text entirely suits the subject. ... is a superb book and no-one with an interest in canals should miss it'. Boundary Post, magazine of the Birmingham Canals Navigation Society

‘…As well as an excellent narrative, the book is very well illustrated with many splendid images of this engineering marvel. I can thoroughly recommend this book’. Magazine of the Mid Warwickshire Yacht Club

'...A beautifully produced and very handsomely illustrated book ... a wonderful and highly informative addition to the literature on Thomas Telford ... I hope it will encourage more people to visit Pontcysyllte and the Llangollen Canal'. Tim Rolt

'...has an enthralling style of writing which stimulates and maintains the focus of the reader...vivid descriptions of the canal journeys...is a stimulating source of information, excellent photographs and maps for visitors to the area...will provide a great opportunity for readers...to extend their knowledge of the outstanding work of civil engineering which resulted in the 'aqueduct in the sky' at Pontcysyllte'. Love Wrexham Magazine

'...As well as the excellent narrative, the book is very well illustrated with many splendid images of this engineering marvel'. Coventry Canal Society

'...this highly readable book, with many and varied illustrations (photographs, maps, reproductions of paintings and engineering drawings) which help to bring the subject to life alongside many quotes from a rich variety of sources'. Cuttings Magazine, Shropshire Union Canal Society

‘This beautifully illustrated book begins with a review of historic sites which show the evolution of canal aqueducts’. Journal of the Railway & Canal Historical Society