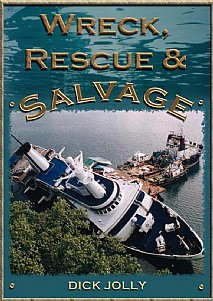 After joining the Australian Merchant Navy at the age of sixteen, Dick Jolly trained as an engineer before joining the Australian National Line as a cadet. After a four-year apprenticeship, he gradually gained promotion while travelling around the Australian coast. Fascinated by the world of commercial deep-sea tugs and salvage, his first real break came in Portsmouth in 1963 when he landed a job on RFA Typhoon. Relocating to Singapore and with a Foreign Going tugmaster's qualification under his belt, he went on to travel the oceans of the world, hauling derelict ships, dredgers, floating cranes and all manner of other craft.

For four years he left the sea, trying to earn a living as an opal-miner in Andamooka in the Australian Outback where the vast majority of miners go bankrupt! It was an advert for the post of tugmaster in the Port of Eden which brought him to his senses, and he returned to the world of salvage. After further work in the Far East, his no-nonsense attitude was appreciated by the managing director of a new salvage company and the author was sent to Germany to purchase the company's tug, the Intergulf.

Captain Jolly relates many fascinating stories from the hard-bitten world of commercial salvage: dragging blazing ships off rocky shorelines, rescuing crews from the middle of the ocean and avoiding hostile natives. On one occasion, he had to drive through the jungle at break-neck speed to avoid being taken hostage! These and many other gripping adventures are recounted in this exciting, true-life and humorous story, which is complemented by stunning colour and black & white photographs.

This rousing, true-life story will appeal to all those interested in maritime stories, autobiographies, the international towage and salvage fraternity, and anyone looking for a good read.

'This truly is an adventure story... An exciting book which grips the reader immediately... Recommended'. Sea Breezes

'...The stories are exceptionally well told and there is a rich vein of humour running through some of the incidents. They will provide many hours of fascinating reading'. Shipping Today & Yesterday

'...a lively treasure-chest of recollections of a lifetime in the business. And along the way, his book of memoirs ...lifts the hatch on the little -known world of deepsea towing and marine salvage. ...plentiful details of what was involved and observations of the people and places...' Nautilus UK Telegraph

“Thank you for your quick turn around... ”
Tim, UK
“Many thanks for dealing with the order so promptly... ”
Dianah, UK
“...my Mum was delighted to receive her beautifully wrapped edition of Caithness Archaeology this morning. ”
Ann, UK
Dunbeath, Caithness, Scotland KW6 6EG, UK T: +44(0)1593 731 333 E: info@whittlespublishing.com